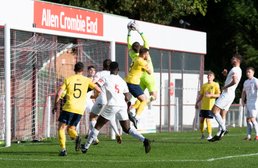 The Brewers made three changes from the midweek draw against Long Eaton; in came the returning Nathan Valentine, Scott Smith and debutant Rob Guilfoyle.

In the opening minute both sides saw efforts blocked: firstly, Dan Hartley denied Matthew Cotton’s effort before Tad countered and Guilfoyle saw his shot charged down.
Tadcaster almost broke in behind in the fourth minute as Guilfoyle slid Cole Roberts through but the flag went up for offside denying the Bradford loanee a potential second goal in as many matches.

The best opening in the first half for the Brewers came in the seventeenth minute when Lewis Hey lifted the ball over from the edge of the box after Roberts had laid it off for the number 10.

In the 31st minute, with the hosts attacks becoming more dangerous, Lewis Hey read the danger dropping onto the goal line to head away from a corner to keep the score goalless.

The Brewers saw midfielder Luke Sharry forced off through injury in the 37th minute - Roy Fogarty came on in his place leading to a tactical tweak.

The second half started badly for the Brewers as returning skipper Nathan Valentine was shown his second yellow card in the 49th minute for a late challenge. Initially the visitors reacted well to going a man down, still looking to get forward and break the deadlock.

In the 53rd minute Tadcaster penalty claims were waved away as Guilfoyle looked to have been upended as he made a smart turn in the box. A little over ten minutes later Lincoln were, however, given a penalty, much to the confusion of the Tadcaster players - it looked as though Josh Grant had got to the ball but the referee immediately pointed to the spot. Cotton stepped up and made no mistake giving the hosts the lead, 1-0.

In the 73rd minute Lincoln netted their second, a fast break ending with Park drilling his shot into the bottom corner, 2-0.

With fifteen minutes left to play James Beaston launched a brilliant effort which was destined for the top corner but for an outstanding save from Jack Steggles in the home goal.

In the 83rd minute Leo Priestley fired a powerful half volley narrowly over before Andy Janssen made it three in the 87th minute and Josh Parker added a fourth in the 89th minute, curling the ball into the corner, the pick of the goals.

With no game next Saturday Tadcaster’s next outing is a trip to Stocksbridge Park Steels on Saturday 5th November, kick off 3pm. The Brewers remain second from bottom in the Northern Premier League East