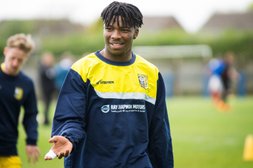 Two goals each from Jack Simpson and Marcel Chigumira and one from substitute Rob Hutton saw the young Brewers get back on track with a 5-2 victory at Pontefract Collieries on Wednesday night.

Tad got off to the perfect start opening the scoring on two minutes. A brilliant piece of attacking full-back play from captain Ryan Woodhead lead to Marcel Chigumira finding Jack Simpson in the box who made no mistake side-footing into the net.

After a fast start, it looked as though Albion were going to go on and score two or three very quickly but that’s not what happened as Pontefract levelled after fifteen minutes.

A brilliant control and volley from distance by the Colls number 10 looped over Nick Lock in the Taddy goal.

However, Pontefract were on level terms for a mere four minutes as Simpson netted his second of the night smashing past the goalkeeper after the home side failed to clear a free-kick.

The pitch wasn’t in the greatest condition at Pontefract, incredibly bobbly making it extremely difficult for both teams.

Having said that, Marcel Chigumira took matters into his own hands on the stroke of half-time and didn’t bother using the ground to put Taddy further in front.

Jake Rose’s lofted free-kick was sensationally chested, touched and then volleyed viciously into the roof of the net all in one sharp movement leaving the Colls keeper with absolutely no chance.

Credit to Ponte though as they pulled one back four minutes into the start of the second half. A strike from all of thirty yards swirled in the air navigating its way into the back of the net to give the home side hope.

Mikey Morton and Si Collins’ side had total control of the contest though as a number of clear cut chances were missed to establish daylight (at night-time) between the two teams.

With ten minutes to go Tad did all but wrap up the points as Dan Davison was hauled down inside the area.

Marcel Chigumira stepped up and coolly dispatched the spot-kick to secure his brace.

And in the final minute substitute Rob Hutton got himself on the scoresheet after instinctively caressing into the bottom corner adding an element of gloss on the victory.