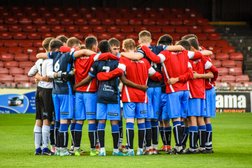 Malt Shovel shocked Taddy’s young guns last Thursday by coming back from 4-2 down to take a point at Goole’s Victoria Pleasure Ground.

The Selby based side opened the scoring on twelve minutes when Sam Akeroyd was dispossessed deep in his own half and Elliott Precious bent a beauty into the far corner leaving Lock with no chance.

Albion thought they were level just two minutes later when Marcel Chigumira turned in Akeroyd’s cross but the assistant referee raised his flag.

Nevertheless they were back on level terms inside twenty minutes when a Shovel defender fired into his own net after Adam Baker was originally denied by the goalkeeper.

The Brewers then threatened to take control of the contest with Baker inches away from turning in Chigumira’s cross before Casey Stewart was denied by the Shovel stopper.

But it was the home side who netted the next goal and regained the lead as a mistake at the back allowed Luke Pearse to tap in after Robson was denied initially by Lock.

As the contest reached the half hour mark Taddy were back on track again as Adam Baker was sent clean through and made no mistake sliding under the keeper.

Michael Morton’s youngsters got off to a frenetic start to the second half after taking the lead for the first time just two minutes in.

Casey Stewart’s low teasing free-kick was diverted in by central defender Owen Marshall. The home side were adamant that Marshall had gone a fraction too early but the flag never came and Tad were ahead.

Two minutes later came a moment of real controversy. Adam Baker surged in behind for the umpteenth time and found the net again.

Albion celebrated and it was 2-4. Or was it?

Malt Shovel were up in arms again as they felt it was offside, but Baker ran from behind certainly was not.

The referee then went over to his assistant where he remarkably ruled the goal and 2-3 it stayed.

The controversy was not finished there though as Taddy were reduced to ten men on 56 minutes.

It all started when Sam Akeroyd glided into the penalty area and looked to have clearly been brought to ground.

The referee didn’t award a penalty, much to Akeroyd’s anger.

Then as play went on, all of a sudden the referee stopped the game and showed Akeroyd and straight red card for dissent.

The eventful encounter then took another twist five minutes later as the Brewers did in fact go 4-2 up.

Adam Baker was having a field day in behind Malt Shovel’s back-line as he surged in time and time again and it was all too easy for him again just after the hour mark when he curled round the goalkeeper.

There’s no doubting that Taddy should have been out of sight in the second half and not given the home side a sniff of a comeback with Woodhead, Baker and Casey Stewart all squandering gilt-edged chances to put the game to bed.

The best chance to seal the three points came twelve minutes from time as Sean Hunter squared to Dan Davison who somehow from just a couple of yards missed with the goal gaping.

The catalogue of missed chances proved to be costly in the end as Malt Shovel threw everything at Tadcaster in the final ten minutes.

They made it 3-4 with eight minutes to go scrambling home from a corner kick.

And it was almost all square again in the final few minutes as Nick Lock got a crucial touch on a low fizzing shot taking it onto the post.

But incredibly, in stoppage time, Oli Bloxham earnt Malt Shovel a point after firing in from 25 yards.