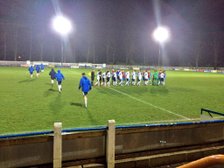 Tadcaster avenged the Youth Cup defeat to Colls earlier in the season with a commanding 6-2 victory.

First half goals from Sean Hunter and Tom Hullock (2) put the Brewers in control before Jack Simpson, Fraser Hansen and Donald Chimalilo all came off the bench to seal the victory.

Dan Davison should have broken the deadlock inside two minutes after a scuffed clearance fell to the attacker six yards out but could only strike straight at the goalkeeper.

However Taddy were looking to stamp their authority on the contest from the off and did deservedly take the lead on nine minutes.
After a positive run from Harry Sheppeard, Tom Hullock’s cross from the right-hand side flicked off a Colls header and past the goalkeeper at the near post.

Full-back Harry Sheppeard forced the issue once again for the second goal driving into the Pontefract half before Sean Hunter made no mistake from five yards.

Dan Davison and Rob Hutton both went close to putting Taddy three goals to the good before Tom Hullock did just that netting his second of the match.

Sean Hunter was pickpocketed in front of goal but with the keeper in no man’s land, in-form Tom Hullock tapped in at the back post.

The promising youngsters were cruising however they were pegged back right on half-time when Pontefract’s number nine sprung the offside trap and squeezed underneath Nick Lock in the Taddy goal to set up an intriguing second half.

Intriguing then became interesting as eight minutes into the second half the visitors reduced the deficit to just one.

Number 10 burst in on goal and knocked it past goalkeeper Lock who had charged off his line and rolled it into the back of the net.

Back came Taddy and Sean Hunter should have restored their comfortable lead when Matty Savage slid the striker in goal but the goalkeeper once again stood tall.

Two minutes later though and the Brewers were comfortably back in the driving seat as substitute Fraser Hansen arrowed a free-kick beyond the goalkeeper from 22 yards.

Eight minutes later and the three points were effectively wrapped up by another substitute. Jack Simpson used his explosive pace to burst past his man down the right-hand side and drive through the keeper’s legs.

And finally it was 6 up for Taddy in stoppage time with Donald Chimalilo heading in Savage’s pinpoint cross.

The victory means that Tad are now five points behind leaders Harrogate Town and one point behind second place Halifax Town, with a game in hand.

And next Monday Taddy U21’s take on second place Halifax Town at the i2i stadium, one not to be missed.