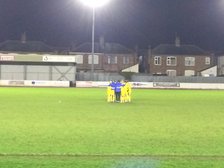 Tadcaster Albion's Youth side put in a blistering performance to blow Goole United away.

It took the Brewers just six minutes to take the lead as Sean Hunter helped on Fraser Hansen's through ball and found the far corner.

Taddy were in complete control against an inexperienced Goole side and after 23 minutes they had a chance to double their lead as Ryan Woodhead was brought down for a penalty kick.

Hunter stepped up for his second but surprisingly he curled over the crossbar.

Hunter wasn't to worry though as he did net his and Tad's second three minutes later.

Hansen the provider once again putting it on a plate for Hunter who couldn't miss this time, tapping into the empty net.

Four minutes later and it was effectively game over as enigmatic midfielder Dan Davison got himself on the scoresheet.

Davison brilliantly turned his man inside the penalty area with a sublime cryuff turn before poking over the goalkeeper and into the far corner.

A mere two minutes later and it was becoming a rout. Jake Rose set Sean Hunter in behind once more who tapped it round the on-rushing goalkeeper to finally complete his hat-trick.

Five minutes later came goal number five. Full-back Fraser Hansen fancied getting in on the act and coolly rolled past the hapless stopper.

Taddy weren't finished there in the first half though as they made it 6-0 before the break.

Kieran Holmes did well to hold off his man and fire a ball over the top for Hunter to net his fourth.

Several alterations to Taddy's side were made by Morton and Collins at the break but this certainly didn't interrupt the flow of goals.

Hansen did brilliantly to halt a Goole counter-attack with a superb hook tackle before driving forward and picking out Tom Hullock who kept his composure to round the goalkeeper and make it seven.

It was definitely just a case of 'how many' and eight minutes later goal number eight arose.

Matty Savage surged forward, slid in Rob Hutton who side-footed into the back of the net.

Tom Hullock netted his second of the evening in the 65th minute turning home from close range.

Arguably the best goal of the night was the tenth, combative midfielder Jake Rose hammered into the far corner from the edge of the area.

The final couples of goals came in the last ten minutes. Number eleven was powered into the roof of the net by a trialist before Sean Hunter rounded off the scoring heading over the goalkeeper for his fifth and Taddy's twelfth.

It was all too easy from the very beginning but nevertheless it was an utterly dominant performance from the young Brewers.