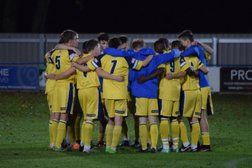 Back To Winning Ways

Tadcaster Albion U21’s put in a convincing performance against Garforth Town U21’s on Monday night and returned to winning ways thanks to goals from Dan Davison, Sean Hunter and Joe Wales.

The young Brewers broke the deadlock after just four minutes when Dan Davison sprung the offside trap, kept his cool, rounded the goalkeeper and tapped into the empty net.

Taddy were in complete control from the off dominating possession and keeping their opponents penned in their own half.

Their lead was almost doubled after just seven minutes when Matty Savage’s tame effort was parried by the Garforth stopper and somehow neither Davison nor Hunter managed to scramble over the line.

The visitors were under immense pressure as they struggled to get out of their own half and the contest could have been all but over inside ten minutes as Dan Davison squandered two good chances after being released in behind.

The inevitable second goal did arrive in the 18th minute when Sean Hunter flicked in at the near post from an in-swinging corner.
Despite the somewhat drab start from the away side, they did work back into the match and did pull a goal back just short of the half hour mark. The advancing midfielder drove into the box and clipped a cute curling effort into the far top corner.

It’s been a case of not putting chances away for both the U21’s and the first-team in recent weeks and the game could have definitely been done and dusted if Tad’s youngsters were a little more clinical in front of goal.

Taddy started the second half like the first, like a house on fire and somehow they didn’t re-establish their two goal cushion two minutes into the half.

Harry Sheppeard was getting plenty of joy bombing down the right wing time and time again and the defender almost got himself an assist. The 16 year old drove to the by-line, pulled it back towards Woodhead, three yards out but was denied by an outstanding last ditch tackle from a Garforth substitute.

The three points were almost in the bag when Taddy did make it 3-1 in the 57th minute. Matty Savage’s clever reverse through ball was latched onto by Davison who was incidentally brought down by the goalkeeper.

Joe Wales was the man to step up and he made now mistake sweeping low into the bottom left-hand corner.

Substitute Simpson and Joe Wales both came close to adding gloss on the scoreline but it ended Tadcaster Albion U21’s 3-1 Garforth Town U21’s.