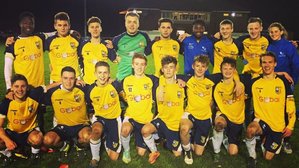 Taddy Youngsters Off To The Perfect Start

First half goals from Donald Chimalilo and Casey Stewart put The Brewers in control before Stewart added a second in the second half to seal it.

Taddy’s West Riding County FA U21 season kicked off on the road with a trip to Bradford to face Campion AFC.

Taddy gained complete control from the first whistle, dominating the ball and suffocating the home side.

The Brewers made their dominance count after half an hour as the smallest player on the field rose highest to glance in.

Rob Hutton’s in-swinging corner was flicked in at the near-post by winger Donald Chimalilo.

The home side came close on a couple of occasions to drawing level but Nick Lock in the Tad goal was in fine form tipping two onto the crossbar.

Morton & Collins’ side then doubled their lead on the stroke of half-time as the effervescent attacker Casey Stewart danced past three red shirts before bending into the far corner.

Just fourteen minutes into the second half and the points were effectively sealed for Taddy as Stewart notched his second of the evening.

Taddy’s high fierce pressing game forced Campion into a mistake and Stewart made no mistake of rounding the goalkeeper and rolling the ball into the empty net.

Campion rallied as time ran out and hit the crossbar for a fourth time before they did break the Brewers’ stingy back-line with a neat move and finish.

Next up for Taddy’s U21’s is Goole United at the i2i stadium on Monday 10th October.