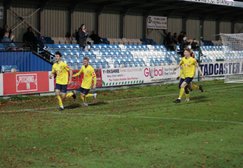 Ten-Man Tadcaster denied by late Long Eaton Equaliser at the So Trak Stadium.

Tadcaster made three changes from the side that drew with Shildon at the weekend; Nathan Valentine, Stevie Smith and Eddie Prata were replaced by new arrivals Elliot Owens and Luke Sharry making their debuts, whilst Cole Roberts was handed his first start after impressing off the bench against Shildon.

The hosts created their first chance of the evening in the sixth minute, but Roy Fogarty saw his deflected shot denied by the keeper at full stretch to his left, the Tadcaster number nine still hunting for his first goal in yellow.

Micah Jebbison was threatening for Long Eaton on the wing throughout the opening 25 minutes; the forward got into the box and went down under pressure - protests were waved away before Jack Rogers struck goalward but Max Culverwell stood tall and parried.

In the 23rd minute the visitors drew first blood; a long ball was flicked on by Alex Marshall to the willing run of Luke Cox who shifted onto his left foot before finding the bottom corner, 0-1.

Two minutes later Long Eaton almost doubled their lead. Marshall again won his header redirecting the ball to Jebbison who nodded narrowly over. In the 31st minute Culverwell came to Tad’s rescue; the number one was out smartly to deny Marshall on a one-on-one, the stopper staying big and blocking the effort.

As the game ticked toward the half-time interval the visitors struck the woodwork, a half volley from Rodgers from just inside the box. In stoppage time at the end of the first half Rodgers put pressure on Culverwell which almost led to an opening, but Rodgers fell and handled the ball as the Brewers survived.

There was work for Tadcaster to do after failing to get into their stride in the first half and going into the break behind.

Early into the second half Tadcaster turned to the bench introducing Scott Smith to the action replacing Elliot Owens. The substitute made an instant impact sliding through an inch perfect pass for Roberts as the Bradford loanee bent in his strike with aplomb levelling the game in fantastic fashion, 1-1.

The equaliser boosted the hosts who went in search for a second - T’Nique Fishley was close but over after connecting with a corner. Fishley was again involved shortly after in the 63rd minute, his searching ball almost finding Lewis Hey who just could not stretch to pluck the ball from the air.

In the 71st minute James Beaston was shown a second yellow card for kicking the ball away reducing Tadcaster to ten men.

Despite having the one-man advantage, Long Eaton did not make it count as Tad reacted well to the sending off. Sharry delivered a dangerous free kick which substitute Nathan Curtis flicked on - Dan Hartley was millimetres away from a telling touch before the keeper scrambled to gather.

In the 76th and 77th minutes respectively Hey delivered two dangerous crosses, the first looking for Roberts was just cleared ahead of the forward before his second found Curtis, but his header was saved by Aaron Bott in the away goal.

With two minutes of normal time remaining Tadcaster were awarded a penalty, an adjudged handball gave the hosts a golden opportunity to complete the comeback.
Curtis, showing composure under the pressure and following a considerable delay, duly obliged nestling the ball into the bottom left corner to put Tadcaster ahead, 2-1.

Six minutes were added at the end of the game but within two minutes Long Eaton drew level when a long throw into the box found Jebbison who headed in from close range, 2-2.

The final chance went the way of the Brewers, Roberts cut the ball back for Curtis who could not keep his strike down as his shot flew over.

A much improved second half saw Tadcaster turn the game on its head and come very close to taking all three points but for the late equaliser.

The Brewers are back on the road this Saturday with a trip to 17th placed Lincoln United, kick off 3pm.