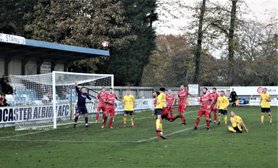 Neil Sibson and Craig Ogilvie made one change to the starting line-up after a narrow defeat at Stocksbridge seven days prior as Tom Classie came in for his debut dropping Lewis Hey to the bench.

Following an even opening Scott Smith won Tadcaster a penalty in the 14th minute, the tricky winger doing well to get by his man before being fouled. Up stepped Rob Guilfoyle but his tame penalty was, however, saved by Lewis McDonald denying the number nine his first in Tad yellow.

The visitors almost took the lead in the 18th minute when a dangerous corner whistled across the face of goal somehow evading everyone in the six-yard box.

Stockton continued to push for the opening goal - Max Culverwell saving at his near post before Stephen Thompson dragged an effort wide. In the 36th minute Glen Butterworth drilled a free kick into the Tadcaster wall; the visitors kept the move alive, feeding the ball wide to Liam Cooke who cut inside but could not keep his shot down - a warning for Tad.

Two minutes later Culverwell stayed big at his near post and with an outstretched leg denied Kevin Hayes. However, in the 43rd minute Stockton took the lead. Cooke who had already threatened on a couple of occasions, cut inside and brilliantly picked out the top corner with a rasping drive, 0-1.

As the sides went into the break Stockton held the lead but the Brewers were very much in the game without having troubled McDonald more than once.

Tadcaster started the second half brightly: Nathan Dyer played in Theo Hudson whose strike was parried by the keeper but just far enough away from Guilfoyle who would have had a tap in. Dyer was again involved in the 47th minute , his corner flicked off the near post and to safety for Stockton - an audacious attempt as the home pressure was building.

Ten minutes into the second half Guilfoyle had another sight of goal; a pinpoint ball over the top from Charlie Jebson-King sent the striker on his way, but as he entered the box, about to pull the trigger, a last-ditch challenge put a stop to the latest Taddy attack. Another corner from Dyer was dangerous but hit the side netting

Stockton doubled their lead in the 65th minute, as captain Adam Nicholson managed to scramble home a corner into the far corner after an initial save from Culverwell, 0-2.

In the 69th minute the Managers turned to the bench to introduce Nathaniel Crofts for the first time since arriving from Guiseley and the winger was soon in action; in the 82nd minute, his pass set T’Nique Fishley away, but his low shot was saved by McDonald with his legs.

A minute later Crofts was again the orchestrator delivering a cross for Guilfoyle but from close range the forward could not direct his header on target and another chance went begging for the Brewers.

With five minutes of normal time left Jebson-King whipped in a free-kick but eventually the ball went over. The final chance of the afternoon went the way of the visitors; on the break substitute Nathan Mulligan forced Culverwell into a smart save pushing over the bar.

A disappointing day for Tadcaster who can, nevertheless, take positives from another far better showing but ultimately that first win of the season still alludes them.

The Brewers are back on the road next Saturday with a trip to Pontefract Collieries, kick off at 3pm. The following Tuesday the 22nd , they host high flying Worksop Town in a rearranged fixture KO 7.45 pm