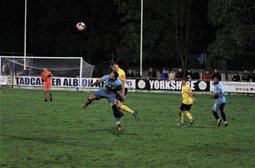 Three goals in the first 21 minutes of the first half were enough to earn the visitors all three points before adding a fourth fifteen minutes from time.

Tadcaster made five changes from Saturday’s defeat at Pontefract, Nathan Croft, Luke Sharry, T’nique Fishley, Nathan Dyer and Scott Smith all came in to start. Luke Hinsley was also handed a home debut after two goals at the last weekend.

In just two minutes Worksop took the lead; Jay Rollins got down the right and delivered for James Hanson, the former Bradford City man sliding the ball home from inside the six yard-box, 0-1.

A minute later Aleksandas Starcenko curled an effort on target but Max Culverwell was equal to it tipping around his post. However, In the sixth minute the visitors doubled their lead. - again, Rollins the provider, this time for Liam Hughes who volleyed into the back of the net, 0-2.

As Tadcaster did their best to overcome the poor start Nathan Dyer whipped a dangerous low cross in but it evaded Hinsley in the box and Worksop cleared.

Worksop added to their tally in the 21st minute Hughes again the scorer, getting free in the box to head in from a corner, 0-3.

Tad came ever so close to reducing the deficit in the 27th minute when the lively Nathan Croft beat the keeper with his shot but a Worksop man cleared off the line.

Terry Hawkridge drove forward in the 34th minute and fired his shot wide of the upright as the visitors pushed for a fourth and with five minutes to go before the break, Hughes almost had his third, some good skill keeping the ball in the air before a powerful volley was saved by Culverwell who stayed big and strong.

On the stroke of half time Hanson was denied by an outstanding save from Culverwell clawing the ball from the top corner.

Worksop were not showing any signs of letting up in the early stages of the second half and In the 52nd minute Hughes came close to his hattrick heading wide of the target.

In the 61st minute the visitors introduced Tavanga Kuleya to the action replacing Hanson and in less than15 minutes he added a fourth, profiting from a Tad mistake at the back with a tap in, 0-4.

In the final ten minutes Worksop created a flurry of chances to increase their advantage but Tadcaster survived with some battling defending aided by several breaks up front to keep the visitors busy.

Culverwell came to their aid in the 84th minute to stop Hughes before the Worksop number 10 headed wide in the 87th minute and fortunately could not reach a dangerous cross in the final moments of the game.

Another frustrating evening for the Brewers who have to dust themselves down and go again on Saturday as seventh placed Dunston are the visitors to the So Trak stadium, kick off 3pm.