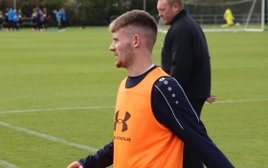 Tadcaster are pleased to announce the signing of Striker Rob Guilfoyle from Marske United who goes straight into contention for Today’s match at Lincoln United.

20-year-old Rob started at Hull City where in two seasons he scored fifty goals for the under 18’s and 23’s. He moved on to York City and then to Bradford Park Avenue in July 2021. He had a stint at Pontefract Collieries before signing for Marske United during the summer recess.

Rob is no stranger to our Manager Craig who coached Rob in his youth career at York City and was delighted to be able to get him involved with Tadcaster Albion.

“Rob is a great player and someone who, as soon as I knew he was available, I wanted to chat with about coming to the club. I know what I get with Rob and he knows how I manage, so I think I’ll be able to get the best out of him. If I can help him enjoy his football, playing how I know he can play, we have got one hell of a signing on our hands.

He is a great lad who will fit into the dynamics of the group well, which is just as important as his football ability He understands the situation we are in at the moment and is very much focussed on what we need to do this season”

We would like to thank Marske United for their help and cooperation in helping us get Rob signed on before the game today against Lincoln.

Welcome to The Brewers Rob!