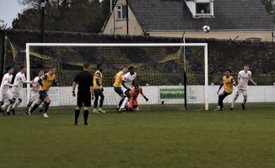 Brewers So Close in Best Performance of Season

Drizzle for the entire 90 minutes did not dampen Tadcaster’s best outing this season despite the disappointing result. With several regulars missing, Neil Sibson’s team, captained for the first time by Dan Hartley, put in a powerful performance and was desperately unlucky not to have at least shared the points

Theo Hudson made an impressive debut for the visitors tucking in just behind the front men , whilst Stocksbridge had three ex Brewers in their line-up: Harrison Davison-Hale between the sticks, Mitch Langton in the back four and Ify Ofoegbu up front.

Early exchanges saw both teams trying to get forward, with Taddy slightly edging play. Nathan Dyer was well placed for Charlie Jebson-Kings curler into the box but it was defended well whilst on eight minutes Luke Sharry put Rob Guilfoyle through but he was fractionally off side.

On the quarter hour mark Hudson drifted through the middle of the park , finding Guilfoyle in space on the right flank, but his cross was a little too high for the waiting Dyer, some twelve yards out, to get any power from his header. Dyer turned provider on 20 minutes putting Hudson away but having made space for the shot the debutant’s shot skimmed over the bar.

Everything was turned on its head, however, on 23 minutes when a poor clearance fell to Steels captain, Kurtis Turner, who had far too much time to tee up an unstoppable thunderbolt into the corner of the net. 1- 0.

With Taddy temporarily under the cosh, there was another unnecessary give away, giving the hosts a chance for a second goal but fortuitously the shot rebounded out from the inside of the upright.

Lewis Hey was unlucky to see his 25-yarder whistle over the bar, Scott Smith then put Dyer away but the winger was off side. Dan Hartley made three vital clearances as the hosts pushed forward whilst Max Culverwell did really well to block a low goal bound shot from Turner and then smother the ball at the second attempt.

As half time beckoned, Tadcaster had the ball in the net as Guilfoyle rushed towards Davison-Hale’s spill of Hudson’s free kick and thumped the ball into the corner of the net. Cruelly referee Goodwin blew for off side but post-match scrutiny of the photos show that the Taddy striker was, in fact, onside.

Play resumed with the rain now heavier but it was Tadcaster on the front foot, ably supported by an outstanding performance from Luke Sharry, a power house in midfield. On 65 minutes Hudson played a short corner to Jebson-King but the shot from outside the box curled away from the six-yard area.

Roy Fogarty replaced Scott Smith - 10 minutes later Carl Roberts was on for Hey who had run his legs off.

With 12 minutes left, Davison-Hale was ready for Guilfoyle’s free kick chipped over the wall but Dyer then had the better of the ex Taddy man alas curling his shot onto the outside of the post from an acute angle

A minute later the effervescent Dyer put a peach of a ball across the six-yard box – it needed just a tap in from Guilfoyle but the striker did not make proper contact. On 82 minutes Jebson-King ‘s free kick caused problems in the box but Jack Johnson failed to get on the end of it .

It was pressure that the Tadcaster faithful had been waiting for all season but the break through eluded them and the points with it . Nevertheless, this was their best showing to date and they need to keep up the momentum.

Next Saturday Tadcaster take on league leaders Stockton Town, already seven points clear at the top of the table. Taddy remain fixed to the bottom of the league with a November schedule in front of them of Stockton, Pontefract, Worksop, and Dunston.