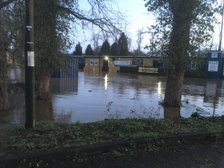 Tadcaster Albion FC has been around for over 125 years - could this be its last season?

Storm Ciara has devastated the club, leaving the pitch under 1.6 metres of dirty river water. The same water has penetrated the Clubhouse damaging the floor and carpets. The strong winds have damaged the roof, allowing rainwater to leak in ruining the ceiling in several areas. Externally everything is covered in dirty river sludge.

The rear fence behind the main stand has been knocked over by the strength of the flood water. The pitch is still partly underwater, and we have been unable to assess the damage at this time. Ground maintenance equipment has been damaged. The new visiting officials’ facility that was nearing completion has been wrecked. We have yet to find out if the floodlights still work.

This is truly devastating and comes just after a group of volunteers have spent time painting and cleaning areas of the stadium preparing for the ground grading at the end of February.

The club has been dealt with a number of weather-related incidents in the past, through its team of volunteers, the local community and support from the wider football community. However, at a Directors’ Emergency Meeting on Wednesday 12 February, the conclusion reached was that this could be the end.

The Club has used its cash reserves to repair the facility after previous floods and is not able to do so again. The Club has estimated that to fix the damage it needs up to £42,000. It does not have any contingency funds left.

The Club is reviewing the situation and will take whatever action it can, including working with the Football Foundation & West Riding County FA, but it is not looking good.

This is devastating news for Tadcaster as a town and everyone involved with the club.
Chairman Andy Charlesworth said “we have invested thousands of pounds in the club following previous floods. We just can’t keep doing this every year. We can’t get flood insurance and we are now facing the potential of closure of the club. For the Club to continue help in the form of donations or materials/services in kind will be needed. On behalf of the club I would like to thank everyone who has shown their support to our current plight”

The Club is bracing itself for the next storm this weekend before any clean-up can commence.

Donations can be made via the “JustGiving” fundraising platform and the Club hopes to be in a position to publish further details tomorrow .