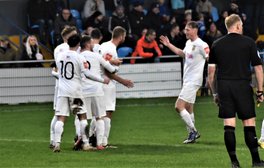 Craig Ogilvie and Neil Sibson named four changes from the side that lost against Stockton last weekend with starts for Nathan Valentine, Steve Smith, James Beaston and debutant Luke Hinsley.

Pontefract started brightly as Joe Lumsden struck a tame effort into Max Culverwell’s hands. In the second minute Mikey Dunn was stopped in his tracks by Dan Hartley in the box with a perfectly timed challenge. Two minutes later Dunn drove an effort wide of the far post, just missing the killer touch.

In their first attack in the eighth minute Tadcaster took the lead; Hinsley showed good feet in the box before firing left footed through the keeper’s legs. 0 - 1

On the quarter of an hour mark Hinsley was at it again, beating the offside trap before producing a superb lob over the keeper putting Tad in dreamland.0 -2

Despite being behind the hosts continued to press, and it told in the 23rd minute. Dunn cut in from the right and drilled his shot into the top corner leaving Culverwell with no chance. 1 – 2.

In the 25th minute Pontefract drew level when Adam Priestley scored his first of the afternoon, flicking a header in at the near post from a deep corner 2 -2.

Following their come back from two down, the hosts continued to hunt for more goals. Priestley and Dunn both had efforts in the 28th minute - the forward first shot over before Dunn fired wide of the far post in a one-on-one.

In the 32nd minute Culverwell was at full stretch to claw an effort out of the top corner keeping the game level. The score line soon changed, however, as Ponte completed the comeback. Cody Cromack’s cross was headed in by Priestley who beat Culverwell to the ball.3 – 2.

Five minutes later Culverwell was called upon again, saving with his legs from Lumsden’s close range effort. On the stroke off half time Priestley had his hattrick when a powerful strike into the far corner put the hosts 4-2 up.

Priestley almost had a chance for a fourth in the final seconds of the half, but having been put inadvertently in on goal, the forward scuffed wide.

Pontefract went into the break comfortably ahead having turned the game on its head.

Playing with confidence and with a healthy lead the hosts came out in the second half looking to add to their tally. Priestley saw two headers in the 54th and 60th minutes respectively go well over Culverwell’s crossbar. In the 63rd minute, Dunn who had been a threat all game, produced an audacious bicycle kick which came back off the upright before the Brewers cleared.

Rob Guilfoyle had the ball in the net for Tad in the 69th minute but the flag was raised, the forward just too eager to get on the end of Charlie Jebson-King’s whipped free kick.
Pontefract extended their lead in the 83rd minute, Jack Shepherd the scorer.5 – 2.

There was time for one more for the hosts; substitute Gavin Rothery was given too much time in the box before he picked out the bottom corner with a low drive compiling more misery on Tadcaster in West Yorkshire. 6 – 2.

It is a quick turnaround for Tad who return to the SoTrak stadium on Tuesday night welcoming high flying Worksop, kick off 7:45pm.