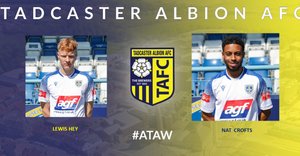 Lewis Hey and Nat Crofts On Loan From Guiseley AFC

We are delighted to report that Guiseley AFC has extended Lewis’s loan to us until the end of January.
Still only nineteen years old, Keighley born Lewis came through the Guiseley academy before signing first team forms under the previous management team at the Lions. He made his first term debut two years ago and after further impressing last season, he was awarded a new and improved contract with Guiseley last July.

Lewis‘s first game for us was the draw at Carlton Town when he was instrumental in our early goal and his contributions in all our subsequent matches have been exemplary.

We are also indebted to Guiseley for the loan of 25 year old Nat Crofts until the 22nd January .
As a youth player, Nat turned out for Barnsley, Sheffield Wednesday and Sheffield United. He signed his first professional contract with the Blades at the age of just seventeen before going on to play for their Under 18’s and 21’s. He then enlisted in a four year course at the University of Virginia where he graduated with a degree in African and American Studies and represented their very successful football team, the Virginia Cavaliers

He returned to England in January 2022 and spent some time with Stocksbridge Park Steels before signing for the Lions in July. Based in Sheffield Nat can play on either flank