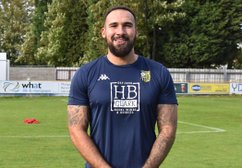 Experienced Striker Back in Yorkshire

WE are delighted to announce that Striker, Jordan Hines, has signed for the club. Most recently the 29 year old had dual registration with Knaresborough Town and AFC Rushden and Diamonds of the Southern League Premier Central.

Born in Leeds, he attended Allerton Grange High School and then Leeds City College obtaining qualifications in both Football Coaching (levels 1 and 2) and Gym Instructing (Levels 2 & 3)

Jordan started his football career at an early age with Yorkshire Amateurs Under 10 -14’s. He then moved on to the Youth squads at Bradford City , York City and Sheffield United. His senior roles started with a season at FC Halifax, two years at Harrogate Town, a year in Norfolk with Dereham Town and then back to Yorkshire for three seasons with Thackley where he suffered an horrendous knee injury tearing both front and back cruciate ligaments.

Due to the onslaught of Covid 19 he had to wait over 18 months for the operation and was finally pronounced fit enough to resume his football in the pre-season of 2022 when he signed for Knaresborough Town and then with Northampton's Rushden and Diamonds.