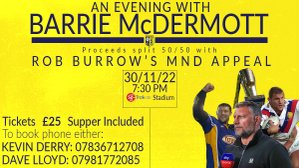 Barrie McDermott is Our Next Guest Speaker

Born in 1972, Barrie started out with his hometown club Oldham where he played 40 games before transferring to Wigan where he won a championship and was first picked to play for Great Britain.

He joined Leeds Rhinos in 1996 and over a ten-year period played 283 games for them. He was the first Rugby League player in Leeds Rhinos’ history to win all three of Rugby League’s big achievements with the club - The Challenge Cup, Super League Grand Final, and World Club Challenge.

He finally retired in 2006 after playing 367 professional club matches and initially worked in a community role at Leeds Rhinos before joining the Leeds coaching setup, becoming the Head of Youth Development. He regularly works for Sky Sports, both as a pundit and at live games.

For many years, Barrie and Rob Burrow were Rhinos teammates - half of tonight’s proceeds will be donated by the club to The Rob Burrow Centre for Motor Neurone Disease Appeal.

Barrie won 17 Great Britain international caps and we are delighted that one of rugby league's most famous players will be with us on the 30th November at the Club to talk to about a career, not only in rugby league, but also his successes as a media pundit, corporate business consultant, charity ambassador, fundraiser, and motivational speaker.